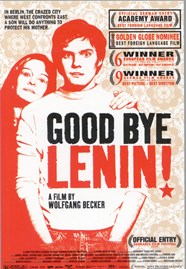 Alexander “Alex” Kerner (Daniel Brühl): “the wind of change blew in the ruins of our republic. Summer came, and Berlin was the most beautiful place on earth. We had the feeling of being in the centre of the world, where everything was about to happen, and we abandoned ourselves to the flow. “

Perhaps Washington will not become “the most beautiful place on earth”, but it is certain that “winds of change” are blowing over the United States. In fact, President Joe Biden’s approach to the Economy is totally different from that of his predecessor, Donald Trump. The current tenant of the White House recently announced his will to push through an epochal reform of the American tax system.

In essence, Biden wants to impose a heavier fiscal burden on the niche and richest segment of the population and on large companies, in order to finance a $ 4 trillion mega-plan,that will be focused on infrastructure and other public interventions to support education, working mothers, and to favour an overall reduction of harmful emissions.

With this move, after bailing out the Economy with the $ 1.9 trillion aid plan, the president intends to lay the foundations for long-term post-Covid recovery, and to correct the ones that Democrats believe to be the American tax system injustices, which would favor too much the scroungers and the accumulation of unproductive wealth. Thus, the new administration is ready to enact the largest federal tax hike since 1942, as reported by the New York Times. According to several liberal economists, such a strategy could accelerate the economy recovery and future prosperity.

The Republicans, however, are ready to battle, as they are opposed to any increase in taxes, even if focused only on the richest and with the aim of financing public investments. However, the White House is optimistic and intends to build consensus around its economic agenda. But that’s not all “about to happen,” as Alex says in Good Bye, Lenin! It is, in fact, likely that the negotiations in Congress will go on for months, with Biden trying to snatch at least a few Republican votes.

Also Jerome Powell, president of the Federal Reserve, and Janet Yellen, secretary to the US Treasury, talked about the Economy during a joint hearing in the House. “We expect inflation to rise over the course of this year”, but the increase “will not be particularly large or persistent” the Head of the Fed stated. A weaker demand alongside with supply chain bottlenecks and comparisons with last year’s weak trend will favour the overall prices increase. Yellen instead stressed that “unemployment will remain high for a while and new measures will have to be studied”, but the recovery should consolidate in the autumn.

Turning to Europe, an interesting analysis comes from Phi- lip Lane, a member of the Executive Board of the ECB. The economist, speaking at the spring conference of The European House Ambrosetti, said that “to defuse the risk factors” - linked to the impact of Covid-19 - “it is essential that the European Central Bank plays a role of stabilization, strengthening confidence by committing to preserve favorable financing conditions». For Lane, the Eurotower must exploit the most of its monetary policy tools, such as the low level of rates, until inflation will firmly converge on a level close enough but below 2%. Furthermore, in the case of the ECB, while there is no need for winds of change, there is needs to maintain and develop policies that will offer a robust support to the Economy for all the time needed.

Remaining within the Eurotower sphere, it is useful to recall last week’s speech (via videoconference to the European Parliament) by Christine Lagarde, president of the institute. According to the banker, the continent’s economy has “improved” but there are still several uncertainties, especially in the short term, linked to the spread of the virus’ variances.

In particular, Lagarde expects a new contraction in the first quarter of the year and “a steady recovery of the economic activity in the second half of 2021”. Eurotower number one added that, in the medium term, she expects an increase in demand and a withdrawal of containment measures. Finally, Lagarde confirmed a GDP growth estimate of “4% for the euro area in 2021, 4.1% in 2022 and 2.1% in 2023”.